I previously did a review of VMAs 2014 and MTV Movie Awards 2014, so, I decided to review EMAs as well. Especially, when it’s the only award’s show that happens almost in my time zone and I don’t need to get up at the middle of the night to watch it live.

This years show was the 20th anniversary of the EMAs and it was held in Glasgow, Scotland. Fun Fact: on Monday, at OneRepublic concert in Vilnius, they said that when asked what crowd was the best, they used to say that Glasgow’s crowds were always crazy. Of course, then they also praised Lithuania’s crowd as “one of the most insane ones”.

MTV EMAs started with a kick-off show in Miami with Fifth Harmony and Jake Miller. The red carpet event was also broadcast live before the actual award ceremony. Let’s talk about fashion, shall we?

Best dressed to me were:

Actress Jena Malone in a cute A-line dress, model Jourdan Dunn in a white mini dress with deep V-neckline and Ariana Grande in her stunning black gown and NO PONYTAIL. She looks amazing with her hair down. 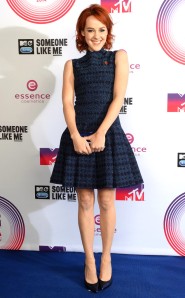 The award’s show was hosted by Nicki Minaj and I really liked almost all of her costumes. Her jokes were so-so (for my taste).

I also liked that they included social media stars like Jerome Jarre which I only recently discovered through Casey Neistat (other YouTube content creator) and Lily (Super Woman).

Plus, I enjoyed Kiesza’s and Charli XCX’s performances. The 360 shot of Charli looked cool. Nicki’s Anaconda performance was vulgar as usual. That song is catchy as hell but I still hate the message it conveys. Alicia Keys’s closing performance was powerful and brought a serious message to this ‘pure entertainment’ type of event.

Moreover, I was super excited to see Ed Sheeran and Enrique Iglesias at the event. I am going to see them both live soon! Enrique at the beginning of December and Ed on February the 15th.

The backstage footage and all the interviews were more interesting to me than the actual show. I would love to work as a backstage host one day or as a producer of this kind of show. This year’s bbackstage host Laura did a great job, I loved that she always knew what to ask and when to stop asking. 360 backstage cam was also an interesting addition to the ceremony.

I was the most happy that 5SOS won a few awards (Best New and Best Push), that 30 Seconds To Mars picked up Best Alternative and that Katy Perry got quite a few awards too.

The last point I would like to mention is that this year’s EMAs had little to no really big current celebrities.(Ozzy Osbourne isn’t a current celebrity, he is a legend). Katy wasn’t attending, Miley, Taylor, Beyonce, Rihanna wasn’t there as well. 1D never attends any shows nowadays and their thank-you video message sounded not as genuine as it used to (even Justin Bieber sounded more thankful). I know that this is European Music Awards and all of the big stars are based in the US or touring around the world, but still it would be nice to see some big names come to this side of the pond.