As you might know if you read my blog, me and my dad usually spend our father-daughter time at a movie theater. Last time it was my dad’s turn to choose a movie, so he picked Need for Speed (You can find its review on this blog).  This time I got to choose a movie so, I went for Noah – epic-biblically inspired movie based on myth of Noah – savior of humans. I didn’t choose this film because I am religious or something like that, but because of 3 reason that have names: Douglas Booth, Logan Lerman and Emma Watson. I have loved these actors since I first saw them in big movies.  Emma Watson is always going to be stuck in my mind as Hermione from HP but I was amazed by her performance in a The Bling Ring as well. (review coming soon).  Logan Lerman is perfect Percy Jackson but the first film I have seen him in was The Perks of being a Wallflower – a movie which, I believe, every teenager should watch. Speaking about Douglas Booth, LOL is still one of my favorite movies ever (I liked his chemistry with old Miley Cyrus) and I have watched his last movie – latest adaptation of Romeo and Juliet with Hailee Steinfield. So, with a mind set of “I just want to see my favorite actors” I didn’t really know what to expect from this movie. I was really surprised that director Darren Aronofsky (he did Black Swan back in 2010) picked this story to adapt into a motion picture. I mean, how can you show something that has happened before the recorded history? If you make something up, it becomes a fantasy movie, but you can’t make biblical stories into fantasy movie? Or can you? If I was confused before watching the movie, I am surely got even more confused after it. Maybe it is good to watch movies like that. It makes you think about stuff and really inspires you to dig deep and to look for answers. It was the same for me with the epic Cloud Atlas by The Wachowskis. I still think about it sometimes. But back to Noah. Film tells a story of the descendant of Seth (Seth was one of three sons that Eve and Adam had. When Cain killed Abel, Seth descendants became good people and Cain’s – bad ones.) Noah (played by Russel Crowe) was chosen by the Creator (God’s name is never spoken) to save the animals because they are innocent and to help kill all the people because they destroyed The Earth and turned their backs to the Creator. The main antagonist is played by Ray Winstone, his character name is Tubal-cain. The movie raised a question for me: what makes humans real humans? What is humanity really about? Is it an ability to forgive or ability to be just? When watching a movie I thought that Noah was just stupid for believing someone who may not even exist and for preparing to do some stuff that were not humanly at all. (Sorry if you didn’t understand what I meant by this, but if I explained it more I would have spoiled the entire movie.) I liked the performance of all actors; I believe they were chosen wisely.  However, one of the drawbacks of the movie was these really awkward situations. For example, all people should be vegetarians to be good, Noah is the first drunkard in the world. And finally, that massive rainbow at the end didn’t do any good as well. I would rate this movie 3.5/5. My dad really liked it and we had a very heated conversation about it in the car on a drive home. It is definitely not a movie to watch when you are lazy, but a serious film about humanity problems. I have read that the director said that this was the least biblical interpretation of a biblical story; so maybe, you need to watch it with a different mindset and expectations than those I had. If you give this movie a try and you get confused as I did, leave me a comment down bellow so we could discuss it. We might find answers then:) TRAILER:  https://www.youtube.com/watch?v=6qmj5mhDwJQ 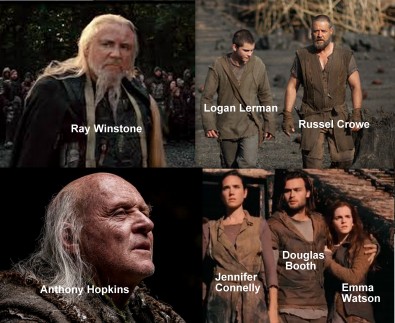